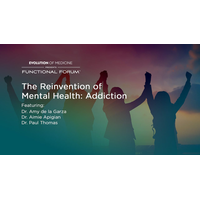 Evolution of Medicine is thrilled to announce the third in its series on the Reinvention of Mental Health. On the first show we looked at the foundation for this reinvention—the understanding of the gut-brain axis and a whole-person approach. On the second show, we focused on depression and the power of salutogenesis, and discussed new tools to solve the underlying causes of depression. In this third installment of the series, we're going to focus on a critical topic: addiction. Even before the pandemic, levels of substance abuse with medications like opiates were higher than ever and led to the first decrease in our life expectancy in more than a half-century. This has been accelerated by the pandemic, which has resulted in worse health outcomes and decimated support structures that kept people out of the medical system.

This will be a great episode and couldn't be timelier. Join us on September the 13th at 8pm EDT.